February 2023Wines of the Month 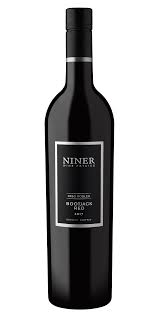 For the wine snob: The grapes in this blend were grown at our two estate vineyards in Paso Robles. Heart Hill Vineyard is located in the Willow Creek District and Bootjack Ranch in the Geneseo District. Only 13 miles apart, differences in soil and climate between the two create very different expressions of place. We find that both vineyards complement each other in a blend to produce a wine that is a great representation of the quality that Paso Robles can achieve.

For the rest of us: 32% Cabernet Sauvignon, 23% Malbec, 20% Cabernet Franc, 8% Grenache, 7% Carmenere, 6% Merlot, 2% Zinfandel, 1% Barbera, 1% Syrah. We hand-harvested each varietal and fermented them in stainless steel tanks independently. When composing the blend, we used Cabernet Sauvignon for structure, Malbec for a juicy component and Cabernet Franc for fine tannin and length. All other varietals in the blend are accent pieces, each adding spice and different fruit characteristics. 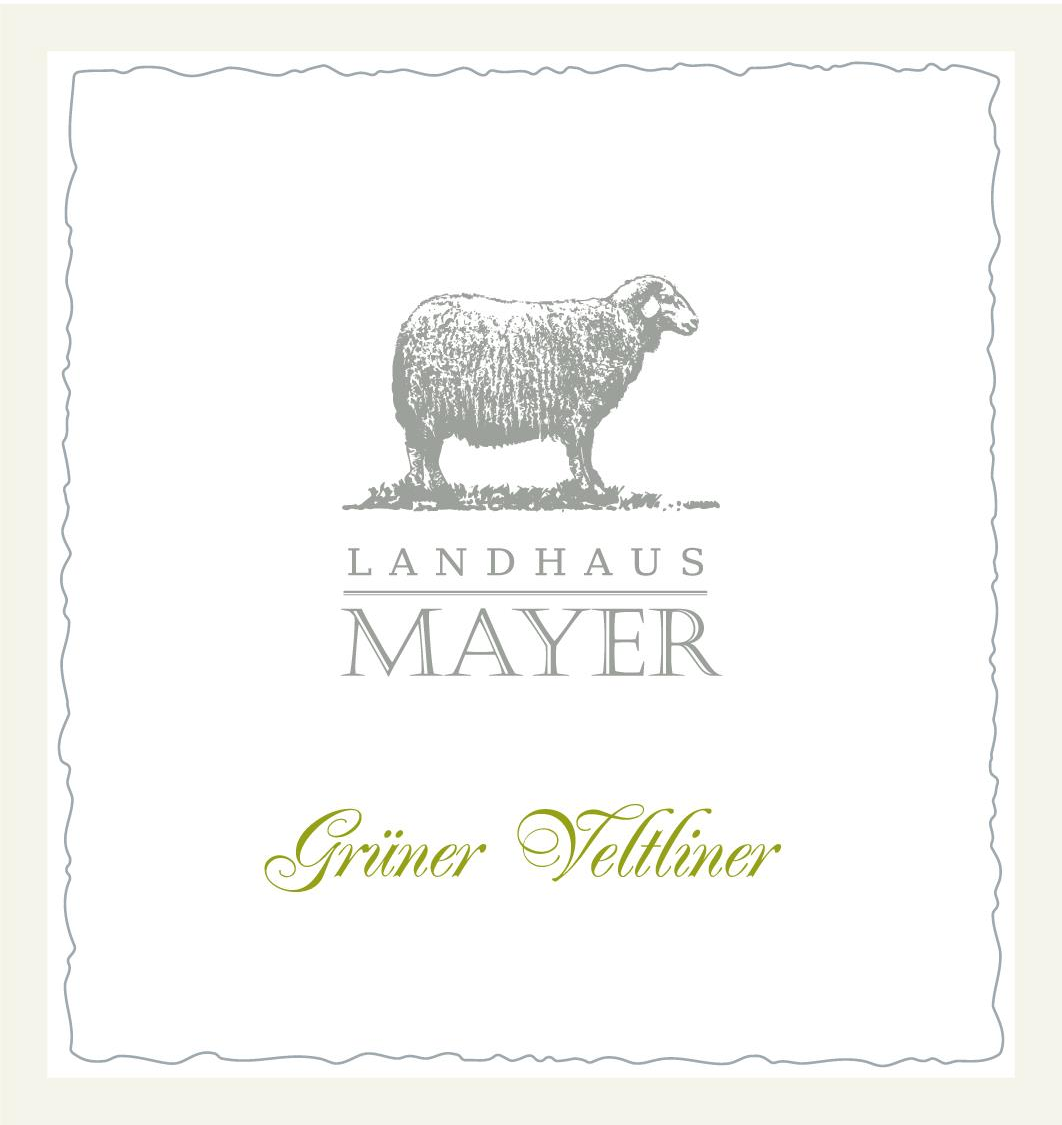 For the wine snob: Landhaus Mayer has established a cooperation with the winegrowers of Lower Austria, who have been passionately dedicated to cultivating their prime vineyards for generations. Gerhard J. Lobner, production manager of Landhaus Mayer, and the winegrowers jointly decide which steps to take in the vineyards. The vines are closely monitored from the pruning up to the optimal harvest time.

For  the rest of us: With elegant spicy aromas, this medium-bodied wine, which is very lively and refreshing, is the perfect food partner. Peppery notes mingle with clear grapefruit aromas and offering a pleasant acidity and delicate herbal spiciness. Lively on the finish. A classic, quaffable Gruner. 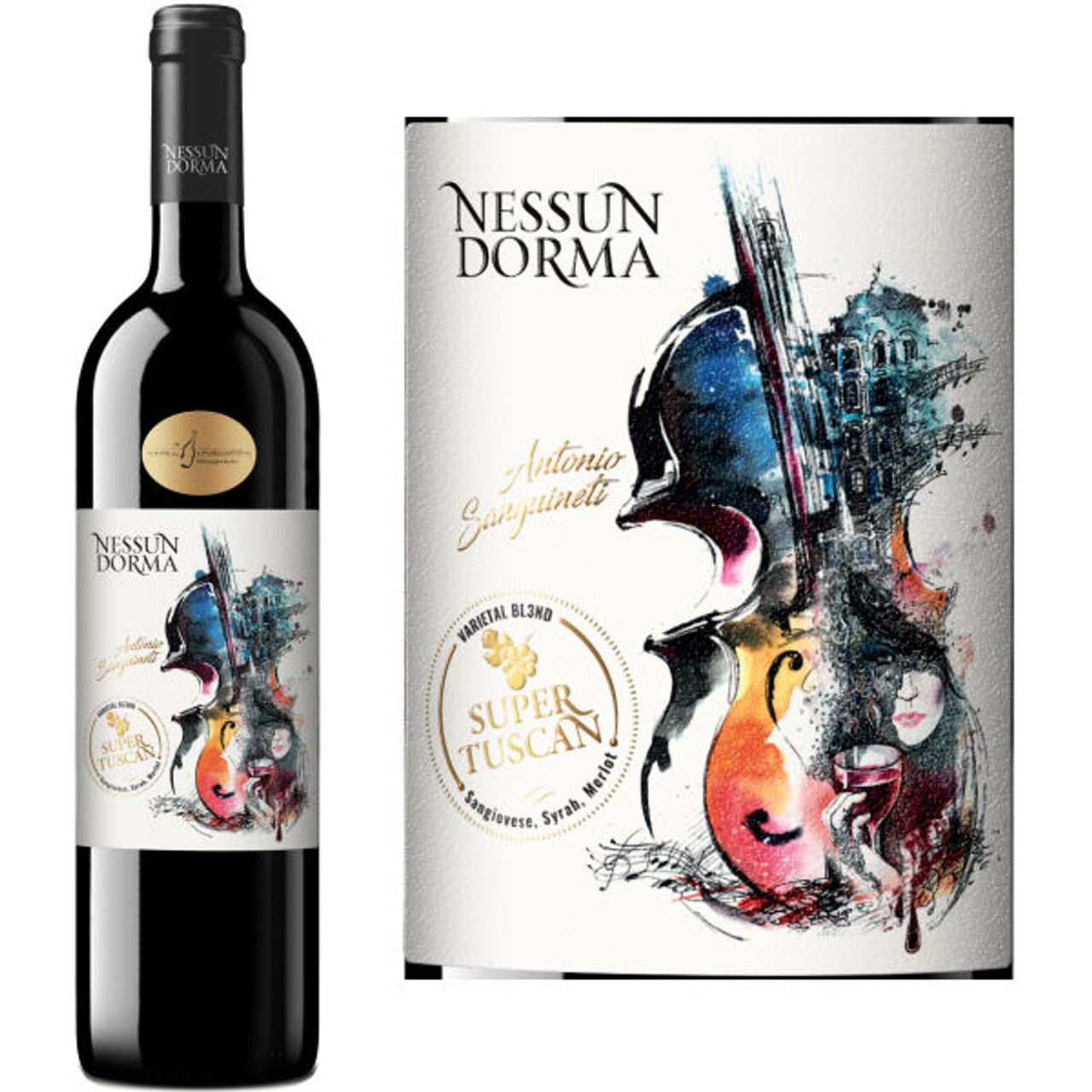 For the wine snob: Reflective of the vibrant spirit of winemaker Antonio Sanguineti, “Nessun Dorma” is a gorgeous red blend named for his favorite aria. With vines carefully selected from three different sites in the Maremma, the Maestro has made a true “Super Tuscan.” The layer of Merlot is intensely floral and elegant, with Sangiovese providing the wine’s bright and buoyant backbone. A judicious measure of Syrah adds depth and body, offering a bold expression of forest-floor truffle, ripe cherry, and blackberry preserves.

For the rest of us: 50% Sangiovese 30% Merlot 20% Syrah. This wine has subdued aromas of black-skinned fruit and dark baking spice. The simple palate shows black cherry and a hint of cedar alongside round tannins. For the wine snob: This exquisite and original blend of Sauvignon blanc, Semillon with 5% of muscadelle gives the wines a slight roundness. Augustine is Fresh, elegantly grassy, and abundantly aromatic. This wine has complexity with notes of pear, white peach and fresh almonds. On the palate a well balanced acidity follows through to a long lasting finish.

For the rest of us: Fresh and aromatic, this crisp white is the perfect way to start any meal. Enticingly marked with notes of lemon, lime zest, pear, white flowers and a subtle grassiness in the finish, Augustine will spirit you away to a breezy summer night in Bordeaux! 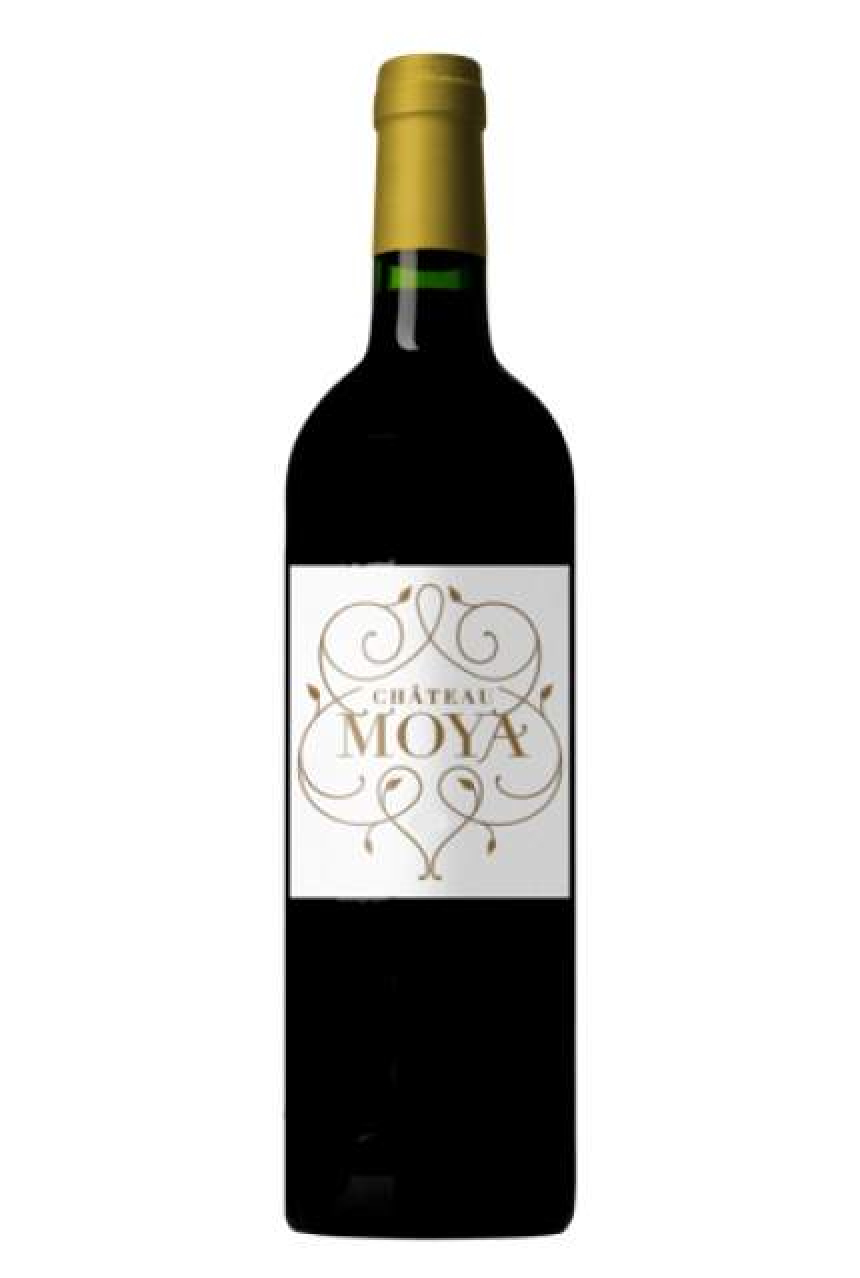 For the wine snob: Located in the heart of the Cotes de Castillon region on the prestigious right bank area. The region was named after the last battle ‘Castillon la Bataille’ that ended the Hundred Years’ War in 1453 between England and France. Today this remarkable terroir neighboring Saint Emilion is producing some of the finest Bordeaux wines. The fabulous sun exposure on its slope and its microclimate has made this appellation very fashionable over the last decade. Chateau Moya is one of the region s’ pilar. It has been many times awarded and received exceptional ratings by the critics. Under the care of Damien Landouar a star wine maker who using traditional farming techniques as well as very ‘’avant garde’’ methods such as genodics ( playing music of a certain frequency to the vines enhancing their health and quality of the fruits ) The production of this fully Organic growth has made Moya a cult wine with many followers.

For the rest of us: On the nose, the wooden, toasted, and spicy notes stand out. Ripe red fruit notes are present. On the palate, it has a frank, very round onset with a beautiful evolution towards acidity. The red fruits are present throughout the tasting, and the tannins are well blended and round. An elegant and smooth wine. The 90% Merlot in the blend of superb quality brings the richness and an exceptional velvety mouth feel completed by 10% cabernet sauvignon giving the structure of a ‘’grand’’ wine 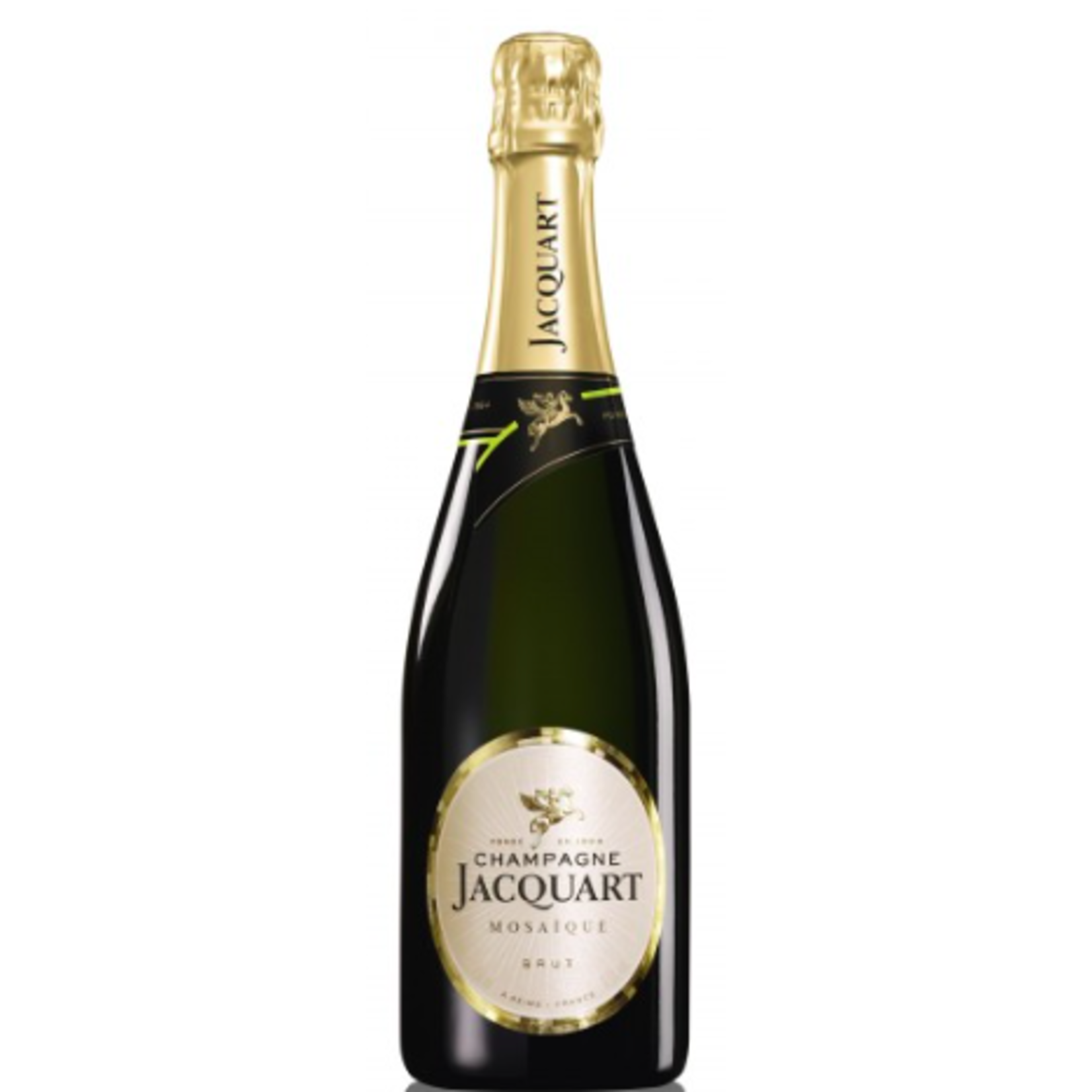 For the wine snob: The vineyards selected for Champagne Jacquart now cover a mosaic of more than 60 growths among the 150 vinified every year. They are carefully nurtured by our partner winegrowers. Each one adds its own aromatic nuance and texture to the richness and complexity of our Champagnes. The choice of our vineyards and wines is guided by our knowledge of the terroirs best suited to the Jacquart style.

For the rest of us: 40% Chardonnay, 35% Pinot Noir, 25% Pinot Meunier. On the nose fresh and delicate, with notes of white fruits, pear and peach, fresh apricot and white flowers with roses. Dried fruit aromas reveal it is starting to mature. The palate is lush, generous and creamy. Beautiful exuberance driven by white fruits and lemon zest notes on the finish 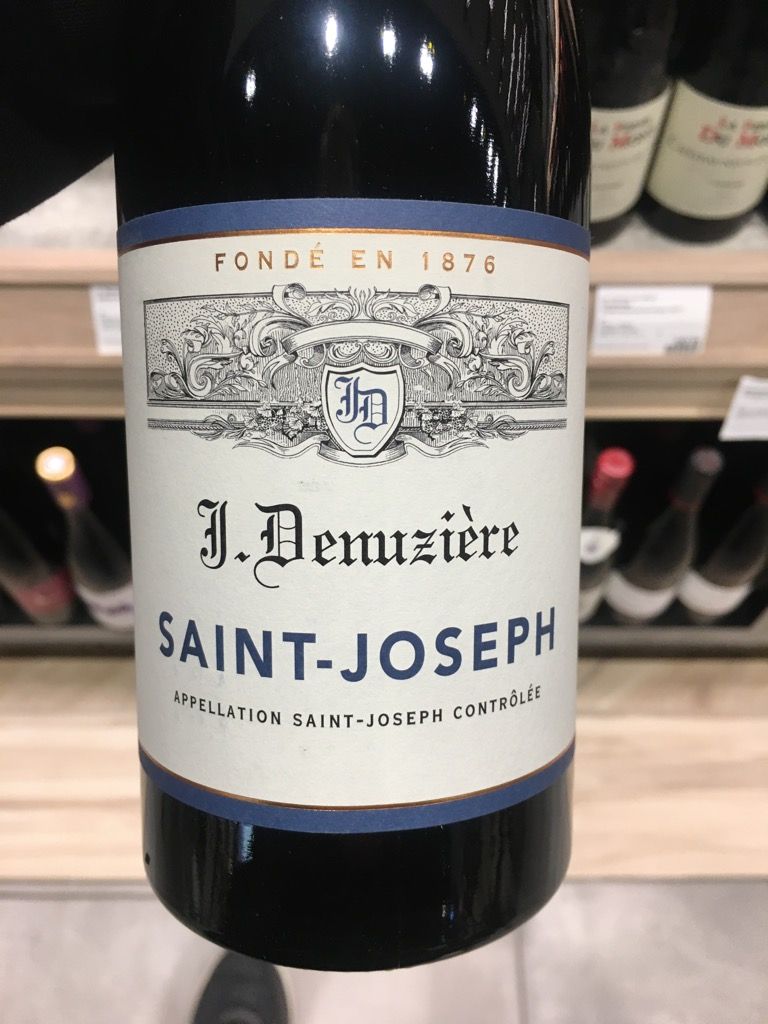 For the wine snob: The J. Denuzière story began in 1876 and it continues to write itself today. At the time, Joanny Paret, the founder of the estate based in Condrieu, wished to develop the reputation of local wines in Rhône cafes and bistros by distributing them using his horse team. For several decades, the family business lived on with the dynamism of Joseph Paret, son of Joanny, who has perpetuated the work carried out by his father for forty years.Paret Wines then became Denuzière Wines when Pierre Denuzière, Joseph Paret’s son-in-law took over from his father-in-law in the 1940’s. For 80 years, the name “Denuzière” has been part of the vineyard landscape in the Northern Rhône Valley. Today, the J. Denuzière micro-cuvées are crafted around this Condriot heritage and strengthen over the vintages.

For the rest of us: 100% Syrah. This stony, deeply mineral Syrah balances crisp cassis and black-cherry flavors against a deeply earthen core. It’s opulent in texture but stately, uplifted by tangs of salt, iron and granite. The finish is framed by soft, easing tannins making it approachable young but it should drink at peak through 2026. 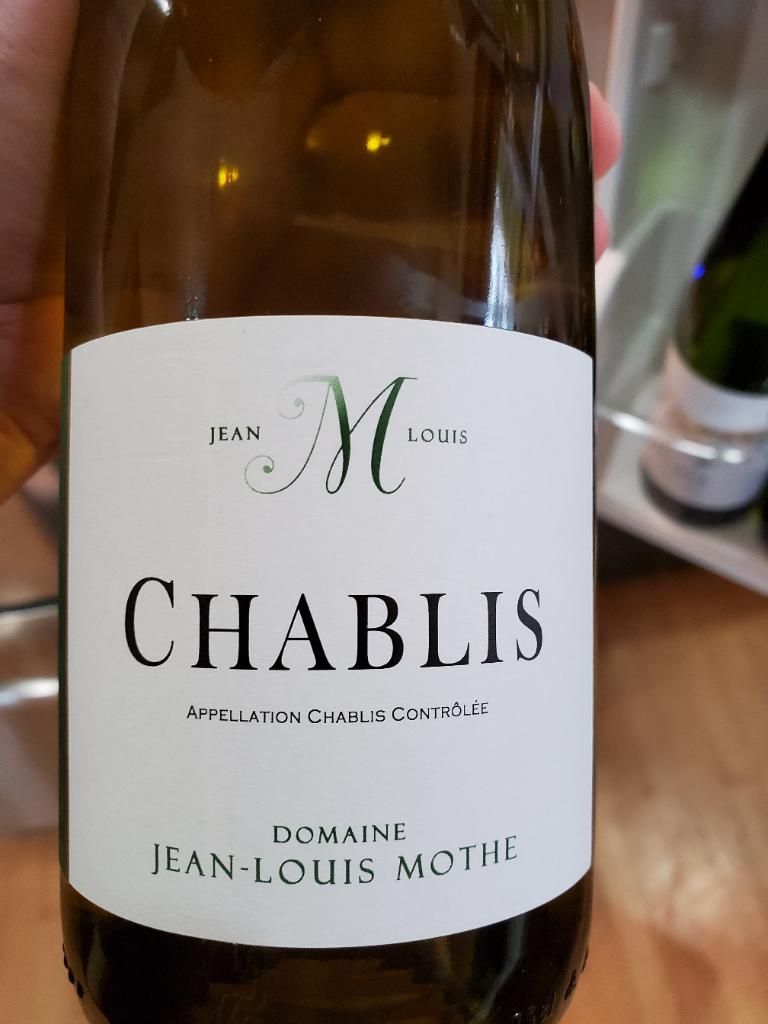 For the wine snob: Jean-Louis Mothe is the son of Guy Mothe and is the 4th generation working this 42 acre Domaine which covers the Chablis, Petite Chablis, 1er and Grand Cru appellations. The Mothe family works rigorously in their vineyards to ensure that all the grapes entering the cellars are perfectly ripe and in prime condition. The Domaine practices sustainable agriculture (“culture raisonnée”) which is very close to Organic practices. Chemical products are only used as a very last resort. Vinification is undertaken in the traditional Burgundy fashion and only the Grand Cru wines spend time in oak barrels. Jean-Louis started selling his wines in the early 1990s and today exports about 30% of his production.

For the Rest of us: 100% Chardonnay. Green apple, mineral, and flint aromas with a slight grapefruit note. Full bodied with ripe fruit, steely minerality and crisp acidity. An elegant, refreshing wine.